The Big Island Pond Weed Management Oversight Committee welcomes lake friends and residents to participate in its extensive invasive weed management activities. With the active participation of many volunteers, the presence of spiny naiad & variable milfoil can be found quickly and reported to the Committee who will confirm it’s presence and direct efforts for it’s removal.
Know when you see the AB Aquatics DASH pontoon boat out around BIP they are looking and harvesting invasive weeds.   Be aware and know there is a diver in the water you can’t see. Please use caution in these areas for the safety of all.
Contact Weeds Task Force if you think you have a spiny naiad or variable milfoil in your area.  Please share this information with friends and neighbors it is our privilege and responsibility to the stewards our home, Big Island Pond.

CLEAN off any plants, animals and algae found during your inspection and dispose of it away from a waterbody, and use any cleaning technologies at launch sites before entering, and after leaving a waterbody.

DRAIN your boat, bait buckets, bilges and other equipment away from the waterbody, leaving your boat’s drain in the open position during transport.

DRY anything that comes into contact with the water

NH DES typically recommends a combination of the following for the biggest impact on controlling invasive weeds: 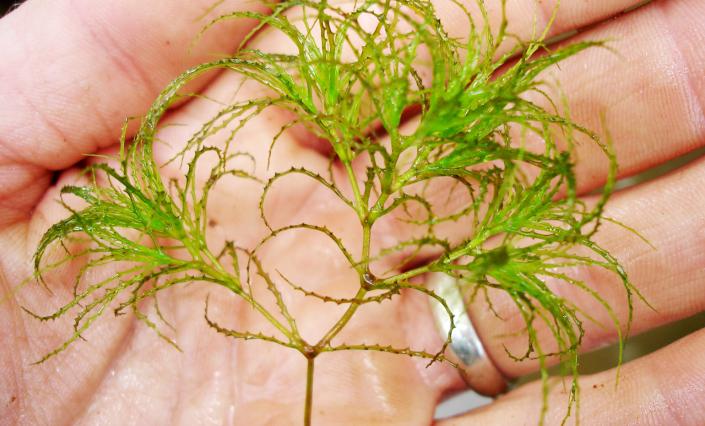 In the fall of 2019, European Naiad was spotted in the Blueberry circle cove of Big Island Pond.  NH DES was contacted and confirmed the presence of this annual invasive weed, just prior to drawdown.  AB Aquatics was deployed to DASH the plants.  Due to the fragile nature of the plant, DASH activities were immediately halted. Based on the experience of other NH lakes, DES recommended monitoring the cove, as this annual plant rarely came back.  European Naiad is known under many names: Najas minor, brittle waternymph, Spiny Naiad and Brittle Naiad to name a few.

In mid-July 2020, Blueberry circle residents confirmed European Naiad was back.  In mid-August, 11 benthic barriers were deployed in the cove.  Feedback from AB Aquatics and residents suggest that the benthic barriers were not enough to address this issue. NH DES provided guidance and what raw materials they had to deploy fragmentation barriers and Restricted Access buoys for this area.  Through the work of BIP volunteers those materials were deployed and more were built and deployed around Turtle Island, a small island across from Blueberry circle cove.

We continue to work with NH DES to understand this new invasive weed.  While many NH lakes have experienced this annual invasive weed only one other NH lake has seen a recurrence like BIP has.  Northeast Pond found this weed in 2005 with a 41 acre infestation. Three years later, they had decreased the footprint by 50% by using a herbicide and DASH activities.

European Naiad threatens boating, swimming, fishing, and property values for all of us if the spread is not addressed. To learn more about this invasive weed check out some of these sources:  Maine Lake Volunteer Monitoring Program , NOAA GLANSIS and Illnois Wildflowers site. 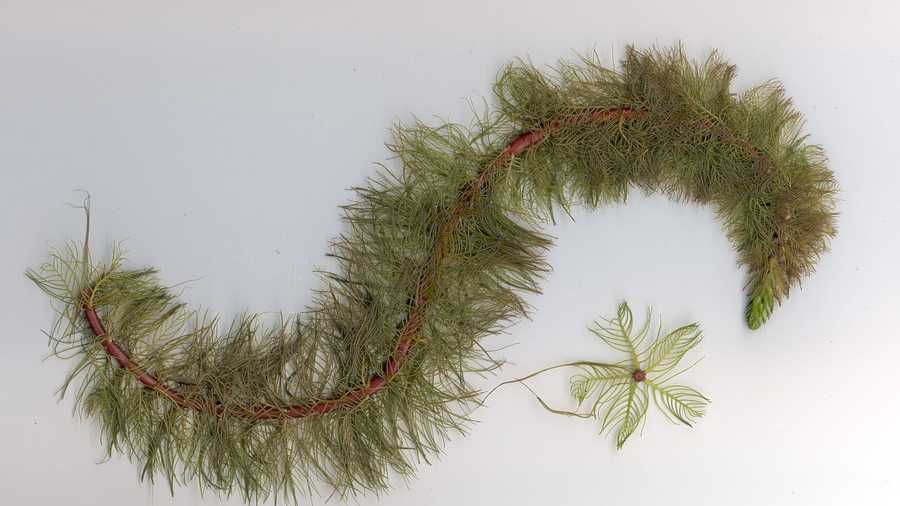 In 2000, variable milfoil was spotted in Big Island Pond.  This perennial weed, grows uncontrolled in the Northeast states due to ph levels and with sunlight can grow 3+ inches per day.  Big Island Pond has been long been battling this infestation utilizing significant investment with the help of countless volunteer hours, Friends of Big Island Pond and AB Aquatics. Looking at snapshot of the last 12 years in our battle against variable milfoil has resulted in:

The deployment of benthic barriers and DASH activities have been successfully used on Big Island Pond forcing back variable milfoil from a large infestation to where we are today – maintenance. Regular DASH activities and our annual drawdown help to control the spread of this highly aggressive invasive weed. 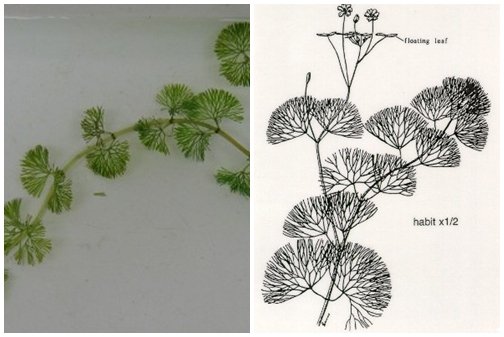 Fanwort has been part of Big Island Pond since the 1950s.  While fanwort is considered an invasive weed, NH DES considers fanwort a fundamental part of the BIP ecosystem. Luckily this invasive weed does not spread or infiltrate other areas of the lake.  Our annual drawdown helps control this invasive weed.