Anything that seeps into the ground around BIP will most likely end up in the lake via run off or through the springs and ground water. Please be careful.

Do not burn brush or leaves near the shore; the nutrients remain behind to be washed into the lake during the first rain. Do not dump leaves or grass clippings in or near the lake. They also add nutrients to the water. It could increase weed growth.

BIPC has a boat ramp at the end of Escumbuit Road in Derry. This is used as the Fisherman’s Access. It is also available to BIPC Shareholders to launch your boat in the Spring, remove it in the Fall, or take your boat in or out for repairs or emergencies.

Docks (stationary and removable) and moorings are regulated by the State. Guidelines for setbacks, sizes, materials and usage are all available. Permits are required for modifications and new construction.

Did you know that State and Town regulations do not allow fires on the ice or on the shore? Special permits are require to burn.

Fires on or around any of the islands are especially dangerous due to limited access for fire fighting equipment and personnel.

Think about it. If you burn trash, logs, brush or leaves near the shore or on the ice, the nutrients remain behind to be washed into the lake during the first rain. The remaining nutrients are harmful in the water. They increase pollution levels and promote weed growth. 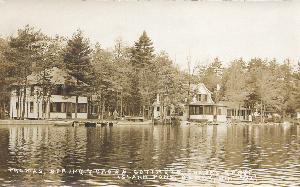 Governor’s Island was named for one of its first owners…NH Governor Bennington Wentworth…who purchased the island in April 1741. Several owners followed over the next approx. 130 years.

Originally there were two separate bodies of water—Perch Pond whose shore land was totally in Hampstead, NH. The second body of water according to historical records was Islandy Pond whose shore line was in Derry and Atkinson, NH. These two bodies of water were connected by two small brooks…one on each side of a mile long island separating the two ponds. In other words, there was never a lake called Big Island Pond until 1878 at which time a dam was placed in the Spicket River.

In 1878 for the sum of one dollar and other considerations Mathew Taylor bought the right from the land owners around both ponds to raise and occupy with water, eight and one half feet above the natural low water level. The method of recording the high water line for all to see was a split stone set in the dam, the top of which was eight and one half feet above the bottom of the outlet of the gate in the dam. The operation of the dam by Taylor supplied water power for five mills down river within the State of NH.

Between 1900 and 1904 Taylor had little use for the Big Island Pond Reservoir because most of the New Hampshire mills had either burned down or moved so he sold his rights to the Arlington Mills Corp. They would use the water to supply their mills down river in Massachusetts.

In 1905 the Arlington Mills Corp. built the present day granite block and concrete dam. (It was later named the Walter Stickney Dam). The dam is located on the Spicket River in the southeast corner of the Town of Derry, NH. The dam has a maximum height of ten feet and a length of eighty feet, including dual spillways of total length of twenty-nine feet.

In the early 1920’s the Arlington Mills were pressed for water supply for their industrial use and because Big Island Pond Reservoir could not fulfill their demands they constructed a dam in the Spicket River at the site of the Wheeler Mill in Salem. This dam created an auxiliary reservoir, now called Arlington Mill
Pond to supplement the water from Big Island Pond.

In the 1930’s Conley’s Grove had a dance pavilion where parties and gambling were attractions.

Mr. Walter Stickney’s family acquired the water rights in 1958 after they were no longer needed by the mills.

In 1974 the BIP Water Level Control Organization was formed by lake resident Warren Kruschwitz and others around the lake to better regulate the water levels by operating the dam in a more acceptable and consistent manner than the NH Water Resources Board was doing. This organization, with the permission of the water right owner Walter Stickney, held many meetings and laid the foundation for the Big Island Pond Corporation.

The object for which this corporation was established is to own, control and protect the water flowage rights of Big Island Pond and maintain water levels for the benefit, best interest, and enjoyment of the members of the corporation. The BIPC is made up of shareholder residents from Atkinson, Derry and Hampstead. They must own property or have a deeded access to the lake in order to purchase shares at $50 each which gives them voting rights in the corporation. The BIPC continues today with a Board of Directors and is an integral part of Big Island Pond itself.

The pond is approximately 500 acres of water and it is 85-90 feet deep at its deepest point. Named for the several islands (there are at least 15) within the pond and the large island in the center.

Walworth B. Williams, “Wally” was born on December 25, 1918 in Boston. He was raised in Newton Centre, MA. On the day of his college graduation he reported to the officer’s training school of the Navy in NY City. He saw service in the North Atlantic and South Pacific on destroyers where he was chief engineer. He witnessed Pearl Harbor s shortly after the bombing and was present at the battles of Midway and Santa Cruz. At the Santa Cruz his destroyer was detailed to pick up the survivors of the carrier Hornet. He personally rescued a sea man from the water. In 1944 Wally met and married Mary Lou French and settled in Winchester, MA and began raising their four children. They were married for sixty years and had a beautiful loving relationship.
Wally was a train man beginning his career with the Boston and Maine railroad and retiring in 1983 as Director of Commuter Railroads for the M.B.T.A. His loves included his family, animals, the outdoors, music, curling.
Wally and his family spent their summers in Hampstead, New Hampshire where he was a founding director of the Big Island Pond Corp. He left a legacy of land and fresh water conservation in Southern NH, culminating in an award from the Environmental Protection Agency. He was on the board of the New Hampshire Lakes Association.

Mary Lou Williams once said that her life’s goal was to “do enough good and creative things for other people and future generations so that I will leave the world a better place than I found it.” Many of her friends and colleagues believe she accomplished just that.
Williams is remembered as a true conservationist whose tireless efforts kept many acres of Hampstead land out of the hands of developers. Her passion was protecting the environment. She worked to preserve watershed areas in towns around Big Island Pond, where she spent summers all her life. Williams and her husband of 61 years, Wally, lived in Winchester, Mass., during the winter.
Mary Lou and her husband bought up the land adjacent to the swamp on Big Island Pond so it couldn’t be developed and destroy the natural habitat for wildlife. She did that around the lake in a number of places, and it is largely because of her efforts that we have a healthy lake today.
Thanks to Williams’ efforts there are more than 30 miles of trails in Hampstead for all to enjoy.

Cal Rushforth served in the Navy during World War II and was a retired mechanical engineer. For those of us that knew him, he was much more. He had been on Big Island Pond for 41 years.  He and wife Millie lived at their beloved Sheep Island lake house in Boulder Cove. He loved playing Dixieland music. Cal played his trumpet while others played a clarinet and an accordion. It was amazing. They could play any song.  Their merry band would play on shore for a while and then take their music on the road (water) via a pontoon boat.  People on shore smiled, waved, clapped, sang and even danced.  Other boaters would make it a parade by following around the lake. What a beautiful gift these people had given me and others around the lake. What a gift Cal Rushforth was to all that knew him.

Wilber E. Longshore, 65, a longtime resident of Hampstead, New Hampshire, died suddenly Saturday afternoon, September 19, 2009, in Ipswich, Massachusetts. According to his family, Westy died while aboard his beloved sailboat, the Aramoana.

Born in Malone, New York, on April 19, 1944, he was the son of the late Wilber E. Longshore and Marjorie Morey Longshore Cropley Make of Derry, New Hampshire. A 1962 graduate of Pinkerton Academy, he was a professional aviator with over 25,000 hours of flying time. After several years as a charter and corporate pilot – during which time he flew former president George H. W. Bush and the late Senator Edward M. Kennedy – Mr. Longshore joined Bar Harbor Airlines. He later joined Wiggins Airways, where he was employed as a pilot at the time of his passing.

A lifelong collector of model trains, rare toys, and antique outboard marine engines, Mr. Longshore was a skilled engineer, mechanic, and carpenter, as well as an ardent conservationist and environmentalist. He was a longtime director of the Big Island Pond Corporation, and of the Ipswich Bay Yacht Club. In his younger years, he was an avid water-skier who won several competitions.